Many developing orthodontic problems can be intercepted and corrected if diagnosed and treated at an early age.

Early intervention involves orthodontic or orthopaedic development/correction as soon as a problem is first detected.

A baby’s jaw is 50% the size of an adult one. By the time a child is nine, their jaw has developed to about 80% of their projected adult size. And, by the time they are 12 they have reached 90% of their fully grown adult size. Hence, early treatment is beneficial as the growth of the bone can be influenced while children are still in the growing stages; later on, the changes are more bone remodelling rather than bone growth.

The eruption and development of teeth should ideally happen in their correct spaces, perfectly balanced by the forces of the soft tissue, pushing both outwards and inwards. When teeth are overcrowded, it is a common misconception to think that the issue is with the teeth themselves. However, it is the incorrect and possibly deficient growth of the jaw bones that fail to give enough room for the teeth. It is important to recognise this early on, and then to start jaw alignment and development.

Research has increasingly shown the connections between misaligned jaws and chronic head/neck pain, as well as between TMD (Temporo Mandibular Dysfunction) and sleep related breathing disorders.

Jaw positioning also has an effect on the surrounding muscles and often affects the way we hold our head and neck. This, in turn, has effects on overall body posture. These reasons merely emphasise the benefits of early intervention to the patient regarding their overall health and wellbeing. In order to avoid complicated treatments later in life, it is advisable to treat jaw and teeth misalignments early on in life.

Some common signs that your child may need early intervention can include:

How does orthodontics lead to early intervention?

Early orthodontic treatment begins while a child’s jaw bones are still quite soft. Their bones do not harden until children reach their late teens. As the bones are still flexible, corrective procedures work much faster and more effectively than they do for teens and adults.

Early orthodontic treatment from Dental Pearls, known as Phase One, intends to correct more serious bite related problems and guide the jaw’s growth pattern. Early treatment may also help to make extra room in the mouth for the permanent teeth to be properly aligned as they erupt.

This is normally done in two phases. The first phase is when the jaw is assessed and then, using appliances, guided to grow to achieve the best possible position. This process (quite importantly) respects the airways, jaw joints and aesthetics of the patient’s face. The treatment is done to correct /minimise any discrepancies in the way the jaws develop.

The second phase is then to bring the mandible forward and in function.

This may mean that the final stage of aligning, which happens once the adult teeth have all erupted, is greatly minimised if not eliminated. With advancements in orthopaedic care today, it is possible to map and analyse the future position of the permanent dentition, when using oral appliances to achieve guided growth of the jaws.

There are several ways you can determine whether your child may need early orthodontic treatment. But the best way is to bring them in for a thorough consultation with our team here at Dental Pearls. 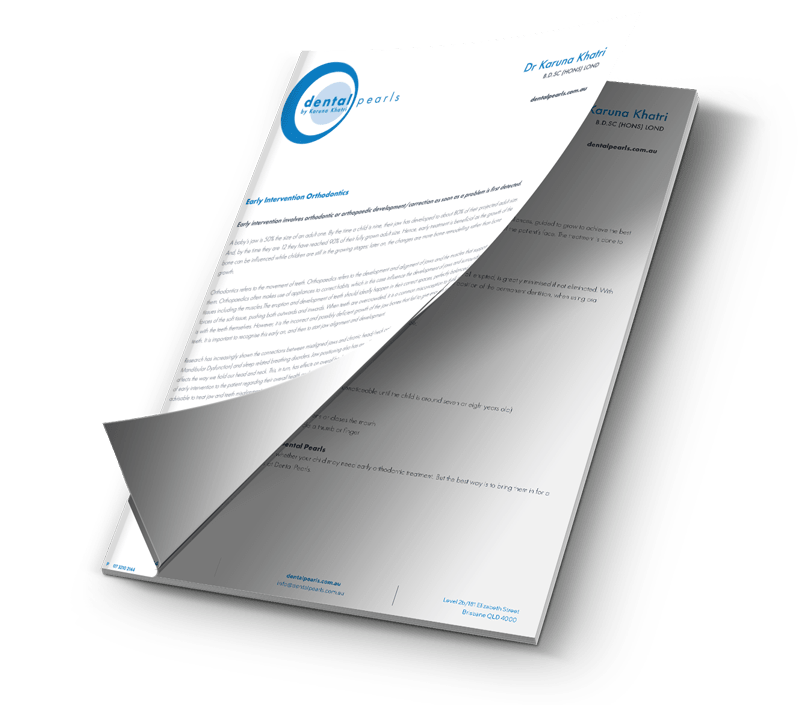